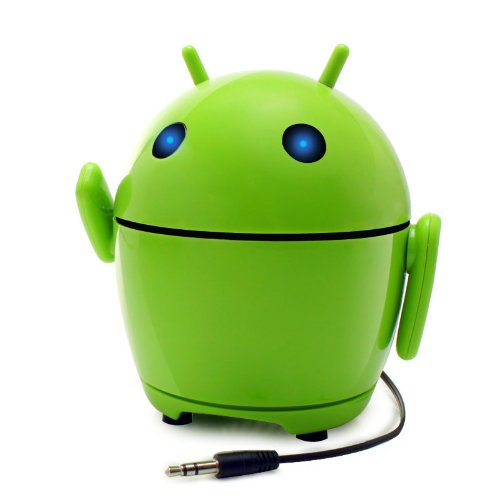 Experience out-of-this-world audio brought to you by your friendly Android character speaker, the GOgroove Pal Bot!

Meet Pal Bot. He’s a cute, user-friendly speaker with extraordinary audio who loves to share his sound with everybody! In exchange for a little power, he’ll give you hours of crisp, clear, and portable audio with nearly any popular media device!

Powerful Sound & Long-Lasting Battery
Featuring Dual Side-Firing Drivers and a Passive Subwoofer, the Pal Bot can deliver rich and powerful audio for a premium listening experience. He also comes equipped with a rechargeable battery that lasts up to 6 hours at max output. Allow the Pal Bot 2-3 hours to fully charge via the included Micro-USB cable, or play while you charge!

Smart, Universal Design
Pal Bot is equipped with movable arms, glowing LED eyes, and a retractable 3.5mm audio cord that can be used with any device equipped with a 3.5mm audio port. His eyes glow blue when he’s awake and purple when he’s asleep and charging. If his purple eyes are flashing, it means he’s tired and needs to recharge.

Compact & Portable
The Pal Bot weighs less than 1 lb and fits in your palm so you can take him anywhere! With his compact size, you can store him in backpacks, purses, luggage, and more.